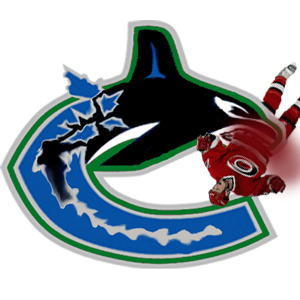 Well here is a true test of where the Canucks are at at this point...by taking on the Hurricanes. The Canes have returned to their Cup contender form and are 4-1-3 to start the season. The Canucks are 4-4-0.
So much can go wrong for the Nucks tonight.
- Luongo isn't known for being sharp after a night off is he?
- The Canucks hardly deserved to win their last game against Columbus, being outshot 14-0 in the second period, taking too many dumb penalties it seemed.
- The Canes are on their game right now and the Canucks are not. I hope that changes tonight and they can put a better overall game together. But I am not counting on it.
The Canes are good, and will burn their sorry asses if Vancouver wants to run around in their own zone and take too many penalties. The Canucks' PP is good for 6th in the NHL. The Canes are 2nd. Their penalty kill ranks are 16th and 17th overall respectively.

The Canes lost their last 2 games in OT. They are going to be hungry tonight.

I'm just not one of those Canucks "rah-rah" types. I could predict that the Canucks would win every game, but I simply refuse. I don't see enough consistency with this Canuck team yet, and I sure see it in Carolina. So I say the Canes take this one 6-3. A win by the Canucks though would be a real moral boost for players and fans alike. But if you have not caught any Carolina games yet this season...prepare to be awed by how much they have changed since last year.