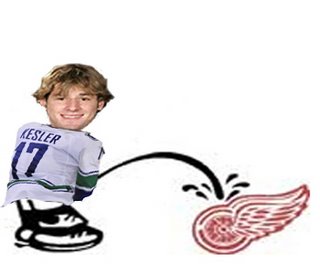 Can you believe that Zetterberg already has 20 points? Will someone injure this guy already?
Zetterberg & co. made the Canucks look stupid last week, making them look like slugs, and outshooting them 39-15. A disgrace of a game to say the least.
I don't see that happening tonight. The Canucks looked very good beating Washington on Friday and should carry that over to tonight, as well as make ammends for that disgraceful game against Detroit last Wednesday.
The Canucks will need to skate hard while containing the Wings' speed. No use giving them any PP opportunities either, as that net-crashing bastard Tomas Holmstrom is red hot as well.
Interesting stats at Canucks.com:
The Canucks have a .800 winning percentage when leading after 1 period. They are a perfect 1.000 when leading after 2.
When trailing after 1 period, they have a .250 winning percentage. When trailing after 2, they are ZERO %. They have not yet come back from trailing after 2 to win a game.
Amazingly, the Wings won every game after trailing after 2 periods.
Let those stats play with your mind.....
Screw it. I say the Nucks win 4-3 in OT tonight, because the Canucks have something to prove in this one. I'm actually getting this game on PPV. But if you want to see a free Period 1, tune in to channel 299 on Starchoice (the Starchoice channel) as the Nucks PPV game will be on that channel until the Edmonton-Ducks game ends on the PPV channel 238.

The Canucks' resolve will be tested early in this one, as they went up 1-0 on a Cooke goal, but the Wings score to tie it 12 seconds later after Luongo let out a bad rebound..right to Holmstrom. 1-1. Bad Luongo. Bad Luongo.
Linden got an assist on Cooke's goal and that ties him with Stan Smyl for all time Canucks leader in assists.
It took the Nucks a few minutes to settle down after Holmstrom's goal, and then they really took it to Detroit. They are shooting the puck more and forechecking hard.
Unfortunately, Bieksa stupidly pinched in the Wings zone, missed the puck, and the Wings capitalized on a 2-on-1 the other way. Nice goal by Samuelsson, assisted by Filppula. Luongo was playing the shooter, so Mitchell should have played got in the passing lane a little better. 2-1 Wings.


Nonis mentioned in the 1st intermission that Bieksa has not found his game yet and that he is "doing too much".
He also mentioned his main concern is with the Canucks' inconsistency and their lousy play at home.
Nonis also said that Mason Raymond looks "nervous" out there, but he is "showing a lot of promise."
He also said that the next player that he would have liked see crack the Nucks' lineup is Josef Balej, followed by Ryan Shannon and Jannik Hansen. Unfortunately, all 3 are injured. Huh, no mention of Jason Jaffray. I guess he is out of Vancouver's plans for now.


PERIOD 2
The Canucks' powerplay is ass. 3 chances so far and maybe 3 shots total. How about that save by Louie on Zetterberg on a breakaway shorthanded? "Bobby Lou, how do you do??" Gotta love Tom Larschied.
Their 4th PP looked a bit better. Still, a lot of passing and less shooting.
Ray Ferraro was just talking about how well Naslund is playing and moments later Kesler-Pyatt-Naslund connect and the puck dribbles under Osgood. Nazzy's goal. 2-2.
This game is pretty good.
Wow, the Canucks were owning the Wings in the final 5, but all of a sudden Jiri Hudler dances around Edler and scores a highlight reel goal over Loungod. That was killer. We had the fucking momentum too! And dammit, it came in the final minute of the period once again. Hey, remember those stats above about how many times the Canucks win when trailing after 2? ........3-2 Wings.

The Canucks come out slow in the 3rd and are gradually getting their legs going. Alain Vigneault has mixed the lines up, and guys like Isbister and Burrows are promoted. Gotta love coaches who reward players for their good play.
-Can anyone remember the last time an Ohlund slapshot actually hit the net?
-Datsyuk and Zetterberg are causing the Canucks fits all night. Too bad the Sedins have not done that for a few games now.
-Alex Burrows is mic'd up tonight. I wonder what Red Wing he asked: "How's the potato farm there, big guy?" Hilarious.

As the clock is winding down, the Wings are giving the Nucks some of their own medicine in defence. The Canucks cannot generate anything.
-still gotta love the loud GM Place crowd, huh? Not. It's a graveyard again.

Luongo is pulled.
Shit! Osgood coughed the puck up trying to shoot for the open net. It looked like Pyatt buried the tying goal but an early whistle fucked that shit up. I don't believe it. The puck was live still! Tough break. Was Osgood jammed into the net? It didn't look like it. I want to see a frontal replay on that.
Game over.....3-2 Wings.
That was a good game. A good effort by the Canucks, but they just aren't in the Wings' league yet. The Wings moved the puck around so well, almost flawlessly. The Canucks looked a little out of sync with their puck movement.
We need the Sedins to step up. The rest of the guys are going. The 1st line is just cycling the puck lately and that's about it.

Player of the 3rd Period:

#40 Steve Kozari, the ref who screwed us out of the tying goal....heheh
actually the Wing's team defence was superb in the 3rd.

Naslund thought the goal should not have been disallowed.

Luongo was angered by the loss. He didn't want to hear about the "better effort" tonight when no points were attained. He said that the Canucks are one of the best teams in the League and need to start playing like it.

Kesler thought it was a goal too. He looked completely disappointed overall.