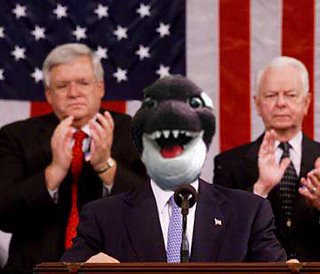 I'm not going to give a big analysis on tonight's game except to say that the Canucks had better win this one. I'm pretty sure that if they lose, the panic button will be nearing the red, if it isn't already.
Strangely enough, both teams have only won one game in their last 5. I don't know what Nonis is going to do to motivate this bunch of clowns for tonight's game, but I say a shakey Canucks team squeaks one out in Washington 2-1.
From Canucks.com:

The Capitals haven't beaten the Canucks in regulation since March 28, 1998. They are 2-6-1 in the last nine meetings, with both wins coming in overtime.

Game Time: 4:00 PST
TV: Sportsnet.
Drink a lot of booze, you never know what may happen. It will numb the pain if we lose.
I could probably pick on Darcy Tucker, but I'll continue my focussed hate on 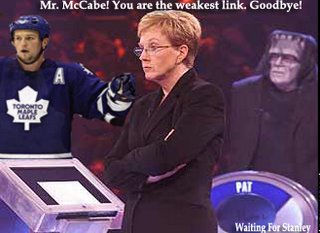 Bryan McCabe. Interesting how once again, when the Leafs lose key players to injury they start winning. That was a hell of a job by them and especially Jiri Tlusty last night shutting down the Penguins. Too bad McCabe couldn't go out long term. Remember how the Leafs rallied when Sundin went out with an injury last year? Or was that the year before? I'm thinking they'll do the same with the Tucker/McCabe injuries.