Well, that was a hell of a lot better. The Nucklebutts showed up tonight and played pretty well. Ovechkin's late goal only put a damper on Vancouver's effort and made it unnecessarily close. I thought the Canucks played their game very well tonight.
Good on Pyatt to bag 2. We need more offence from him.
Badda bop bop bop....I'm loving Kesler's play this season. Hope he keeps it up.
Vigneault got some response from his squad by mixing up the lines again.
- Shots were close: Caps 28 Canucks 26.
- Canucks were 2-for-5 on the power play. The Caps were 2-for-4.
- Luongo continued his stellar play tonight.
So, put away the panic meter for now. But let's be realistic here. The real challenge comes on Sunday night, where the Nucks play the Wings....at home. Hopefully they can carry some momentum from tonight's game. I think they just might.
As a side point....don't you feel a little bad for Ovechkin? He needs better talent around him. He plays well with Semin but needs something more. You can't deny that his efforts are second to none. 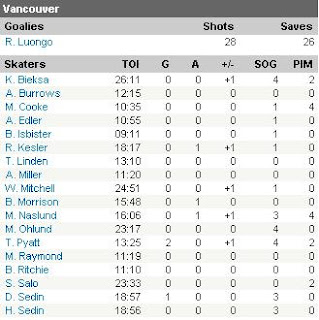