Are these Black Hawks for real?

Share All sharing options for: Are these Black Hawks for real? 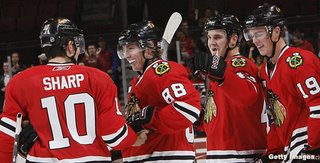 Chicago, who has not been in the playoffs since 2002, are finally starting to like like a team that can make it somewhere. In the last few games I've seen them play, they have so much composure, even if they are down 2 goals against a favored team.
Tonight in Toronto was a shining example. The Leafs were up 3-1 at the start of the 3rd, but were down 2 men. The Hawks made them pay and then absolutely stole this game from them, scoring 5 goals in the 3rd.
Chicago was only shorthanded once all night. The Leafs: 7. Chicago bagged 4 PP goals to make them pay.
I just can't believe how impressive the Toews-Kane-Ruutu line looks. They dominate the play when on the ice. They are 19, 18 and 24 years old respectively.
Toews: drafted 3rd overall by the Hawks in 2006
Kane: drafted 1st overall by the Hawks in 2007.
Ruutu: drafted 9th overall by the Hawks in 2001.
Duncan Keith: drafted 54th overall in 2002.

Kane and Toews are on pace for 80 points or more this season. It's early.

The misery for Hawks fans having to cheer for a basement-dwelling team does have its upside: HIGH draft picking! Now those picks are paying off.

But is this team going to keep up this pace? (They are currently 5-3-0.) What happens when the hype wears off a little? When they lose a few games in a row? How much of a maturity factor is there?
Well, you have to admire Hawks' management adding a decent complimentary blend of veterans to the young roster. Kevyn Adams, Robert Lang, Yanic Perrault, Jason Williams, and even Brent Sopel were key additions for leadership. Yeah, how good was Sopel tonight? He was great. And you could see him talking to the guys on and off the ice showing them the way.
Lang has come back alive in Chicago and has 6 points in 7 games. He looks like he's having fun. So does Samsonov actually....can't imagine why.
Patrick Lalime looked solid in the backup role tonight, and The Bulin Wall is playing superb.
This is a Hawks team that is having fun playing and believes in their coach's system right now. I can't help but be excited for them and the Hawk fans, as they have been through enough grief in the past several years.
Let's just see how long this joyride lasts. I get a feeling there will be some serious highs and lows for this squad this year as they mature. The playoffs really are not out of the picture anymore in the Windy City. It's about fucking time.
And to think that Martin Havlat isn't even playing yet.......

-scores 1st NHL goal
-Toews drops the F-bomb on TV
-Toews scores what definitely will be one of the goals of the year against the Avalanche.