Who's this Jonathan Bernier kid?

Share All sharing options for: Who's this Jonathan Bernier kid? 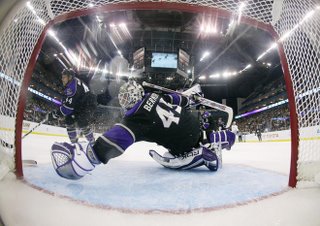 The 19-year-old Bernier was solid for the Los Angeles Kings today in a 4-1 win over the Ducks in London England, the first game of the regular season.

"Jonathan, you couldn’t have expected a better game from him," Kings coach Marc Crawford said. "There was a lot of pressure on him tonight, and he looked like a real solid, solid goaltender," Crawford said. "Not many pucks bounced off of him, and he made a couple of great saves."


Bernier was drafted 11th overall by the Kings in 2006. He has spent the last few seasons with the Lewiston Maineiacs of the QMJHL. Last season in Quebec he played 37 games, with a 26-10-0 record, 2.58 GAA (pretty good for the high scoring Quebec League), a .905 save percentage and 2 shutouts.
He had a 16-1 record in the playoffs as the Maineiacs won the President's Cup.
The talent analysis on Bernier from Hockey's Future is as follows:

Bernier is a hybrid stand-up and butterfly goaltender with great reflexes, is very quick moving from post-to-post with tremendous puck-handling skills around the net. He plays big in big games – save his performance in the 2006 CHL Top Prospects game, wherein the young goaltender allowed six goals on 31 shots in 32 minutes work. He is occasionally prone to get agitated in net when facing intense traffic, but generally manages to keep a level head.


His future at the same site states:

Showing no flaws in his game, and great consistency, Bernier should be a starting netminder in the future. In the Q, Bernier will face many shots and see an abundance of different schemes and looks from the opposition. He still has another year of juniors eligibility left, but has already signed an entry-level contract with the Kings.

He is graded an 8.0.
The Laval, Quebec native is only 19. Can he get a permanent spot in the King's lineup? That will depend on the play of Jason LaBarbera and J.S. Aubin. The Kings signed LaBarbera to a 2-year deal in July, signed Aubin as a free agent, and then dumped Dan Cloutier. It looks as though Bernier may be fighting Aubin for a backup role. But then again, if he keeps putting up performances like today's, he may be battling LaBarbera for the starting role between the pipes. Remember, Aubin was shakey last year in Toronto. Keep your eyes on this kid. The King's goaltending woes may soon be over.
Bernier was signed to a 3-year entry level by the Kings last October in a deal rumored to be worth $2.55 million.

Great save by Bernier with the Maineiacs.
Interview with Bernier "Life in Hockeywood."