Share All sharing options for: Steve Downie gets 20 game suspension 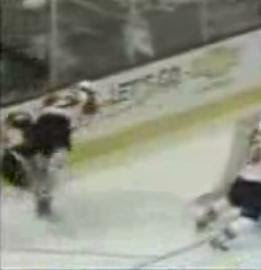 The NHL frowned heavily upon Steve Downie's flying shoulder block to Dean McAmmond's head, handing him the 5th longest suspension in NHL history. That puts his suspension length behind Chris Simon (25 games), Gordie Dwyer (23 games), Marty McSorley (23 games), and Dale Hunter (21 games). The 20 game suspension matches penalties handed to Todd Bertuzzi, Brad May, and Tom Lysiak. Remember what Tom Lysiak did to warrant 20 games? He tripped an official in 1983 after getting kicked out of the faceoff circle. Gordie Dwyer abused officials and left the penalty box to fight in a 2000 preseason game.
Downie may not even get a spot on the Flyer's roster this season, but as soon as he does make it onto an NHL roster during the regular season, the suspension kicks in.
I love violence in hockey. I love hitting, fighting, and don't mind headshots....as long as you don't take a 20 foot run at the guy and leave your feet like Downie did. I know the headshot issue is front and center again, but I've always said that the shoulder pads are to blame for the concussions. I don't want fair hits that happened to be headshots to be taken out of the game. Enough of that.
McAmmond is going to be alright, even though he doesn't remember any of it. But what chaps my ass is what Downie said about the hit afterward:

"I didn't mean to hurt him and I hope he's OK," Downie said following the game. "My game's to hit and to finish the check. I'm just trying to earn a spot on the roster. It's part of my game and I apologize for him getting hurt. I thought I got him clean. Once we hit the boards after, I asked if he was okay."

Didn't mean to hurt him huh? Liar.
Downie is not going to make a lot of friends whenever he does get onto NHL ice. He's an agitator. His worst enemy now is Ottawa's Brian McGratton:

"He'll get what's coming to him next time we play him, that's for sure."

Of course, the wimpy media got all cautious over McGratton's threats, as Bertuzzi images flashed through their minds. Yet when asked about his threats later, McGratton said:

"I don't beat around the bush. I'm not the guy who whips out cliche after cliche, you are going to get a straight answer out of me," McGrattan said. "At least I'm telling him I'm going to do it. I'm not going to blindside him or hit him from behind.
That kid may get away with that stuff in junior but he won't get away with it in this league, not for long."