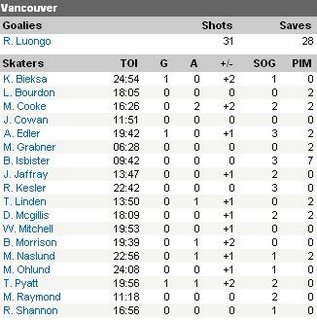 It's just preseason, but it's still better than getting blown out.
Quick Game Notes

- Sharks outshot the Nucks 31-23
-Sharks scored 3 PP goals on 6 chances. Canucks were 0-for-6. I see PP drills in the Nucks' future.
- 2 goals for Devin Setoguchi tonight. He has 5 goals total in preseason play, leading the Sharks. I saw him play for the PG Cougars months back. He was a standout. The 20-year-old is amongst the leaders in preseason scoring and making a good case to stick with the Sharks club. Coach Ron Wilson said this about him:

"He's pretty close to being ready to play in the NHL," Wilson said. "He plays with intensity. He finishes his checks. Like any young guy, he's got a few things to learn about the game defensively. But, all in all, he's a pretty complete player."


- Sharks played Thomas Greiss in goal, a 21-year old German goalie who they drafted 94th overall in 2004.
- why is this even a story? Someone with too much time on their hands simulated an NHL 08 season, and the Sharks won the Stanley Cup, beating the Penguins in 6 games. Joe Thornton wins the Conn Smyth Trophy. Heck, this scenario is actually possible...
Tell you what...I'll try the same thing with my PS3 and see what I get.