Share All sharing options for: Ryan Smyth the "Oilers Killer" 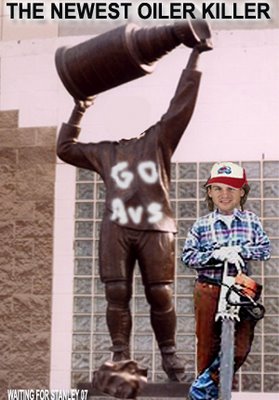 I noticed this at Battle of Alberta yesterday. Ryan Smyth said in the Rocky Mountain News on Thursday:

"Well, hopefully, I can be an Oiler killer. Some teams you play well against, some teams you don’t. I don’t know about impressions. You go out and play and perform, and you try to do it every night, but it just so happened to work out against these guys."

I guess by "these guys" he was referring to when he was an Oiler playing against the Avalanche. Well now the tables have turned, and so has Oiler fans' feelings and emotions about their long lost hero of days past, Ryan Smyth. I think Sacamano at BOA said it best in his post:

That goofy-grinned, greasy haired, goalie interfering ding-dong is an Avalanche now. It's unnatural to have feelings any more amicable than general disdain for those contemptible jerks.

Well, now Oiler fans are going to get a taste of what Canucks fans have had to put up with since 1995. Do I feel bad for Oil fans? Hell no! I laugh at them! But in a sense I sympathize with them because we have to play those renewed pesky Avs about 7 times as well. But watching Smyth crashing Roloson's crease is going to give me vast amounts of pleasure, and I can't wait to watch it!
Now, if Anson Carter actually makes the Oilers' squad full time, Oiler fans may get some satisfaction out of that when they play the Canucks. Hopefully, Matt Cooke puts the team-hopping traitor out of his misery.