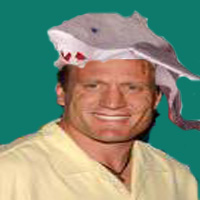 The San Jose Sharks have signed the mouthy center to a 1-year $500,000 contract.

"Jeremy Roenick is a tremendous competitor and he has a great love for the game of hockey," Sharks GM Doug Wilson said Tuesday in a statement. "We feel he can add something to the talented group of players on our club and we feel that this is an environment where Jeremy can be successful."

Roenick had 28 points in 70 games for Phoenix last season and 22 points in 58 games with Los Angeles the year before. So that is a bold statement fom the Sharks' GM. But hey, you never know. Roenick may put up a few more points with the Sharks and contribute well in a leadership role on a relatively young team. Who knows how much icetime Ron Wilson will give him. Roenick may spend more time on the wing, as the Sharks are already deep at center.
I'm hoping it backfires so that the Canucks have no problems with the Sharks this year.