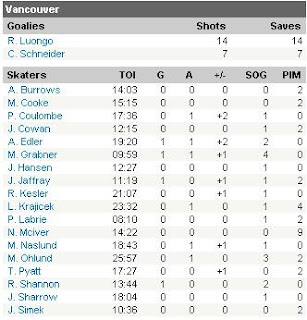 Roberto Luongo and Corey Schneider stopped a combined 21 shots as the Canucks shutout the Lames 4-0. Calgary's iced team was, as TSN put it, skeletal.
Both Alex Edler and Michael Grabner had 1 goal and 1 assist each.
Nice goal by Jason Jaffray (check the highlights) Hope he makes the team. Looks like Grabner has something to say about that.
Interesting how the Canuck veteran forwards got the majority of the icetime, but it was the kids that put up most of the points.
The Canucks had 12 powerplays and capitalized twice. Vancouver was shorthanded only 6 times.
Next game: tonight at 7:00 at the Garage against the Coilers.