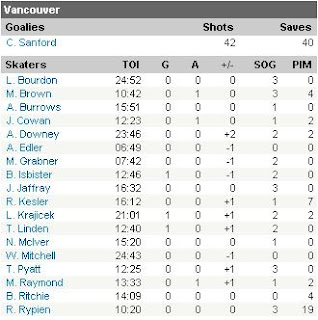 - Curtis Sanford stopped 40 of 42 shots.
- Canucks were without the Sedins, Markus Naslund, Brendan Morrison, and Mattias Ohlund.
- Lukas Kracijek scored the winner at 2:39 of the 3rd period.
- Linden and Isbister also scored for the Nucks.
- The Canucks were 0-for-7 on the powerplay. The Flames were 0-for10.
- The Flames outshot Vancouver 42-30.
- The Flames won 60% of the faceoffs.
- Ah shucks, Owen Nolan tweaked his groin in the first period and left the game for precautionary reasons. Poor Gandalf.

It looks as though Brent Sopel has left the Red Wings and signed with the Black Hawks for a reported $1.5 million. Smart choice Sopes. Fuck the Red Wings.
Bill Wirtz has been dead for 2 days (?) and the Hawks have signed 2 players (defencemen in the last 2 days. Coincidence? A new outlook for the Hawks without Wirtz running the show?