Share All sharing options for: NHL schedule will change 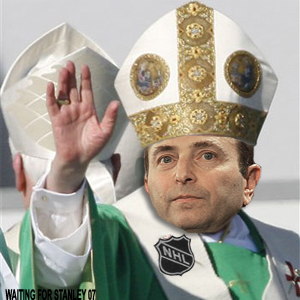 "We had a preliminary discussion about the schedule, and I think it's clear that there will be a change," NHL commissioner Gary Bettman said after the four-hour meeting. "That's something that we will work toward effectuating at the (next) meeting."

Bettman is referring to the meeting with the NHL Board of Governors yesterday, where it appeared that there is a majority in favor of nixing the current schedule format where division rivals play eachother 7 times per season, and mixing it up so every team plays eachother.
The "next" meeting is in November.

Works for me! It's about time this got done. Now we'll see how well Detroit does (for example) when they don't play their shit division rivals so much.