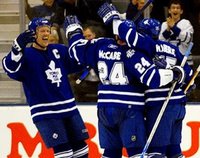 In my 2007-08 Predictions, I picked the Leafs to finish 6th in the East. There are several reasons for that.

1. Their 2-tier goaltender tandem of Raycroft and Toskala is pretty solid. I know Raycroft took a lot of heat last year, but I still feel that was largely unjustified because the team in front of him played so mediocre. They were 4th-worst in goals against in the the East last season. That same concept of the Leafs being unable to play team defence may still be existent this coming season. Especially with a dolt named McCabe on the blueline and other Leaf d-men that like to get caught up ice.
So how can I predict them to make 6th place with such a negative opinion?

2. To me anyway, the Leafs and Bruins made the most signficant additions in the offseason. I would say that the Sabres were gutted and the Habs are just one big question mark. The Sens may be neutral (haven't gotten much better or worse). Weaker teams in your division makes for more wins as they play eachother so many times.

3. Depth. It looks as though Sundin is going to click well with Blake. The Leafs are deep at center. Matt Stajan could be their 4th line center between Chad Kilger and Boyd Devereaux when Wellwood gets his guts tucked back in. Not bad at all.

The Leafs team will have to completely fall apart to miss the playoffs this year. I just don't see it happening. Are they going to win the Cup? Nope. But they will make it to the dance.