Share All sharing options for: Know your enemy: Josh Harding 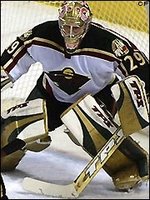 It seems as though Minnesota Wild management was so confident in the 23-year-old goaltender's abilities, that Manny Fernandez became expendable this past year. The native of Regina Saskatchewan has amazing NHL numbers in such a short time. Especially last season. He saw limited time behind Fernandez and Niklas Backstrom, but in 7 games and 361 minutes played, Harding went 3-2-1, with 1 shutout, a 1.16 GAA and a .960 save percentage.
Sure, he plays behind a solid Minnesota team, but those numbers are impressive regardless.

Minnesota will stick to their 2-tier goalie system this season, so watch for Harding to continually impress with increased playing time (and possibly be a thorn in the Canucks' side).

Everything Harding at NHL.com.

Harding operated a Fund The Fight campaign which raised funds for the Canadian Breast Cancer Foundation. $21,355 was raised through selling NHL memorabilia through Ebay.