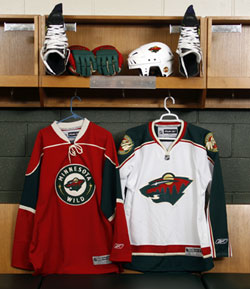 The Wild turned their 3rd jersey into their official home jersey. The other changes are in the stripes, but minimal. 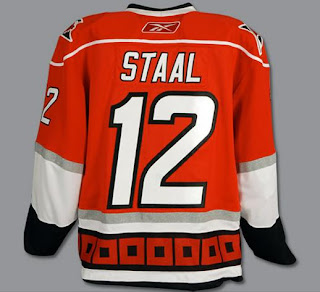 The Canes are celebrating their 10th anniversary and that is commemorated on their shoulder patch.
Just in case you were ever wondering, the squares along the bottom of the jersey do have some validity, even though they don't completely appeal to my taste. They are actually Daytime Hurricane Warning Symbols. Didn't know that until today.

Video of the Canes' jersey unveiling

The Canes also "unveiled" their new Storm Squad. Yup, a batch of cheerleaders. The video of that can be seen here. 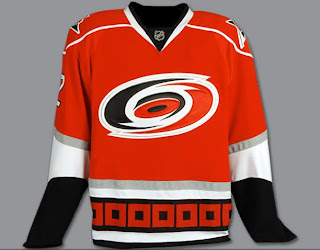 Don't expect many changes from the Avalanche and Devils jerseys, according to Tournament of Logos. And speaking of that site. If you haven't seen it yet, head over there and join in on the "Best NHL Jersey Tournament." Vote for your faves. It's in tournament style, obviously.

Ken Henderson is still creating masterful and comical hockey artwork at his site, including a great spoof of the new Penguins' logo and also a good mock up of the Canucks' logo creation.