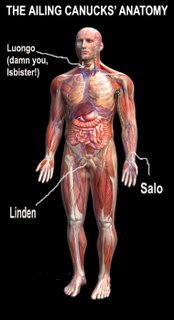 Luongo took a shot in the throat from new guy Brad Isbister. He did his usual "lay on the ice dead for a minute" routine and was escorted off the ice. Nothing a little ice won't take care of. Izzy, don't do that again please. I know you're new here, but Luongo is our god.

Trevor Linden left the intra-squad game with a sore goin. Nothing that a little Viagra and massage won't take care of.

No update on Salo's wrist yet, but we will know by today. **UPDATE** A hairline fracture was found on Salo's wrist, meaning extended time off for that Saloian one. The guy just can't shake the injury bug.

The following player has been released: