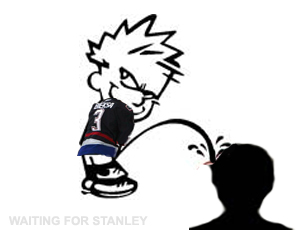 And speaking of people who are not far off from the previous post.....
This from Hockeybuzz today:

Update: The Canucks are talking to a team from the east regarding a "serious power forward." (e4)


My guess: Anson Carter (e4). Not.
Take that with a massive grain of salt, even though it wouldn't hurt to have a bigger, more skilled power forward than Taylor Pyatt out there. To me, this is a bit premature still, as training camp is still ongoing.
Do the Canucks really need another top 6 forward addition? Or does the rest of the team just have to step it up offensively? Remember, Bryan Smolinski has not really been replaced yet. Then again, it wouldn't take much to replace Smoke would it?
Vigneault rewards forwards who excel with more icetime and promotions, even if it is a Jeff Cowan. That system works well. Maybe that concept squashes any real chance of Nonis making a deal for a top 6 forward.