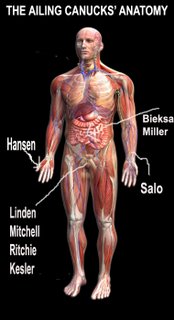 What is up with all of the Canucks' vets having groin problems lately? Add Ryan Kesler to that mix now. He is suffering from the epidemic after the Nucks' 5-4 win over Edmonton.
Jannik Hansen has a broken thumb.
Aaron Miller is undergoing abdominal surgery and Kevin Bieksa has a stomach inflammation. I get that problem too after I drink a 26-er of Spiced Rum.
The good news is that the Canucks are winning in preseason regardless.
And Ryan Shannon is impressing Canucks brass.

"Obviously, the speed factor is excellent, but for me it is the decisions he is making with pucks," Alain Vigneault said Friday. "He protects it well, he gets it out when he needs to get it out. He is a very smart player and that fits in well with our identity as a group. He played three games in four nights and has done well. We have tried him at different positions and we really like what he has brought to the table."

For more on Shannon (including his size factor) see the Vancouver Sun article.

Want a say in what songs get played at Canucks games? Well now you have a chance. Canucks.com is having a contest that you may want to check out. It will require knowledge of ITunes. They list the top current Canucks songs as follows:

Welcome to the Jungle - Guns 'n' Roses (old and overdone)
TNT - AC/DC (see above)
The Hockey Song - Stompin' Tom Connors (Why the hell is Stompin Tom even getting airplay still? Worst song ever and not much to be proud of as a piece of Canadian heritage)
Kickstart My Heart - Motley Crue (good pump-up song)
Blitzkrieg Bop - The Ramones (don't know it.)
Raise a Little Hell - Trooper (overplayed I guess)
Obla-di, Obla-da - The Beatles (huh? how about no Beatles at all)
Where the Streets Have No Name - U2 (I fucking hate U2, but like the intro of it when the Nucks come onto the ice)
Vertigo - U2 (OK, enough U2. Bono is a fucktard)
Get Down Tonight - KC & The Sunshine Band (Please, enough of this one. This is when music took a nose dive. Disco is dead)

LL Cool J- Mamma Said Knock You Out.
Wolfmother- "Woman" or "Joker and the Thief"
Pantera- "Walk" or "Cowboys From Hell"
Beastie Boys- So Whatcha Want or Sabotage
Who sings "Let the Bodies Hit the Floor"? Disturbed? Like it.
Run DMC- Walk This Way
AC/DC- the Razor's Edge would be a nice intro. But generally, "Are You Ready" is a great tune.

Generally, I really like the tunes played at Stars games. Lots of metal!!!!!