The Kings have placed Dan Cloutier on waivers today, due mostly to his injury problems and poor play when he wasn't hurt. This solves the crowded crease dilemna for the Kings. Is anyone going to take Clouts on now? Who? Probably stay in Manchester so that his contract doesn't count against the Kings ($3.1 MILLION. Sorry Crow, but that was a bad hunch you had of the netminder.

Just got my Playstation 3 in the mail yesterday, and I already had NHL 08, just waiting for the system to come in. Let me say, I am damned impressed with both. I

just can't score goals yet in 08. It's tough! The AI is just terrific. I just need to get used to the controls and all of the playmaking skills and concepts.
The game looks absolutely brilliant. But if you don't tighten up defensively, you get smoked. Ales Hemsky scored 5 goals against myself and Temujin last night because we played like the Canucks of 1996. Not even Luongod could save us.
The new jerseys for each team look good. But you have to insert a code to open the RBK jereys and then save it. That code is: h3oyxpwksf8ibcgt
Amazing how you can now pit any European or even minor league team against NHL squads. How about the Moose against the Canucks? Coolness. How about playing Dynasty mode with AHL teams and make a run at the Calder Cup? So many options.
But the greatest part about this game is how the AI adjusts to your style of play and forces you to change up your strategies, and how Bill Clement actually offers intelligent information during the game. He analyses your teams' strategy during game play and will actually mention when the opponent is catching on. And then he offers advice on how to change up basically. Ah, no more stupid Craig Simpson inputs. That guy grated my nerves in NHL 07.
Unfortunately, the above-mentioned pros do not exist in any consoles lower than the PS3, XBox 360 or PC. So upgrade your gaming system dammit, it's worth it!

At least the Nucks beat the Oilers in real life, 5-4 last night. Good to see Isbister be a last second hero, and Kesler pick up 3 points as the game's first star. 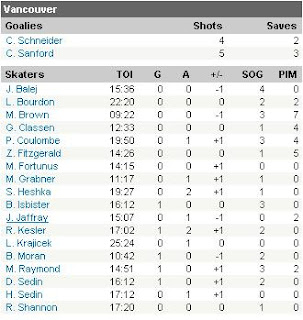