All about Jason Jaffray

Share All sharing options for: All about Jason Jaffray 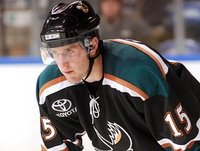 I'm definitely hoping Jason Jason Jaffray makes the Canucks this year, after scoring 35 goals and 81 points in 77 games with the Moose last season. The Canucks could not call him up last year, as he was not under contract. This year he is, and he is going to have to impress Canucks brass in order to make a roster spot.

"That’s what training camp and the games are going to answer," Alain Vigneault said. "Jason has been on a consistent progression since he started with me in Manitoba. He had a really good year last year and has come to camp in great shape. He’s going to get a chance to play some games, and we’ll see from there."
He had a great season last year and now he wants to see if he can do it at this level. A lot of guys can do it at the American League level, but can’t do it in the NHL."

Jaffray can show all the offensive flair that he wants, but his defensive side of his game will have to be apparent, as Vigneault expects defensive responsibility from all his players. Jaffray is aware of that.

"[Burrows] is a penalty-killing, checking, grinding-type of guy now, and he changed his game completely from what he was doing in the AHL," said Jaffray. "He was playing the point on the power play in the AHL, and then he came up here and was a grinder penalty killer. That’s what you have to do when you jump leagues - you just have to fill the spot that’s available."


Jaffray will have some stiff competition to get a spot, as Ryan Shannon, Rick Rypien, Mason Raymond and the already proven Jannik Hansen are battling for final positions as well. But from what I'm seeing, there are 8 spots in the forward position that are officially taken by Naslund, the Sedins, Morrison, Cooke, Kesler, Pyatt and Cowan. Is Byron Ritchie a shoe-in? How about Brad Isbister? That leaves 4 empty slots, and better odds for the younger guys to make it.
Jaffray isn't exactly a spring chicken. He's actually 26 years old. He also has a bit of size, at 6'1" and 205 pounds. He spent 6 years in the WHL from 1997-2002, mostly with the Kootenay Ice. He spent the next 3 years bouncing back and forth between the ECHL and the AHL before securing a spot for the past 3 years with the Moose.
Jaffray's contract is a two-way deal. I'm hoping he impresses enough that he stays with the Canucks.
Bottom line is whoever makes it will need to chip in offensively. Sure, even Burrows is a great checker, but even he needs to put in a few more goals.