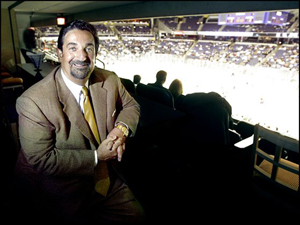 My world just got a bit smaller today. I noticed through Eric McErlain from Off Wing Opinion that Washington Capitals, Wizards, etc owner Ted Leonsis is on Facebook. So I took the opportunity to ask him a question there that has plagued me about the Caps just to see if he'd answer it.

I know the Capitals have signed Nylander this year to center Ovechkin and that was a good start. However, with all of the Cap space you have, why wouldn't you have made a pitch at Briere or Gomez?
Are the Caps slowly building from within and not dishing out big bucks on UFA's?
I'm sure you've heard that question a million times.

To my suprise, he answered my question within a few hours.

I dont intend to use my Facebook as yet another way to answer Caps fan's questions-- if you would like--please email me at Washingtoncaps@aol.com and I will be glad to answer.However...
Why do you think signing Nylander at $5.5 million; and Poti at $ 3.5 million; and Kozlov at $ 2.5 million not dishing out big bucks? That is $11 million in new salaries out the door. We will sell $2 million more in tix next year for those signings:-). We pay Olie $ 5.5 million. We will soon have to pay Ovechkin and Semin huge dollars-- and there ya go-- the entire salary cap will be spoken for.

Points well made. I guess my question would have been better off asked last summer. This is the first summer in a while that the Caps have actually made a bit of noise in the signings of Nylander, Poti and Kozlov. All 3 players I would not have chosen, but that is just my opinion.
But the way Ovechkin (naturally) and Semin are playing, they will get big paydays next summer, and you can tack on about another $10 million at least to the Caps' salary expenditures next summer. They currently sit at about $32 million.
But this is all beside the point. The best part is that Leonsis makes himself readily available to fans online and that is both smart and admirable. See Ted's Take as an example.

The Black Hawks have added gritty checking center Kevyn Adams to their roster today from Phoenix in exchange for winger Radim Vrbata. Points-wise Phoenix wins, as the streaky Vrbata put up 14 goals and 41 points last season. But Adams is one of my faves because he gives 100% every time he is on the ice. He is a defensive and faceoff specialist. So really, both teams win, because both players address specific holes in both rosters.