Share All sharing options for: So long, Mike Ricci 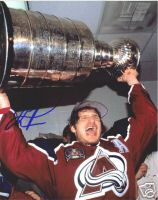 The most beautiful man in hockey has retired today. For the most part of his career he was a 3rd liner with Quebec, Colorado, San Jose and Phoenix and still put up decent numbers. He scored 605 points in 1099 career regular season games. He scored 66 points in 110 playoff games, where he seemed to really excel as a clutch guy.
The highlight of his career came in 1996 where he played a pivotal role with the Avalanche in their Cup victory, scoring 6 goals and 17 points in 22 playoff games that post season. It was his play there that turned him into one of my faves.
Ricci is 36 years old. He is retiring a lot because his neck surgery has gone as well as he planned.
The guy rarely took a shift off. A terrific defensive forward.