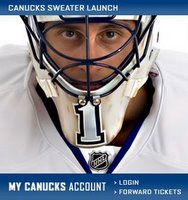 Ah...finally. The Canucks have made it official today that the new jerseys will be unveiled at GM Place on August 29.
From Canucks.com:

Canucks fans are encouraged to join their favourite team for a tailgate party prior to the sweater launch at 12:30 pm. The tailgate party which begins at 11:30 am on the South Plaza will include free hot dogs provided by Grimm’s and Save-On-Foods, Coca-Cola beverages and Canucks prizing courtesy of McDonald’s and The Beat 94.5 FM Street Squad.

These jerseys had better look good or else there is going to be a lot of puke to clean up afterwards.