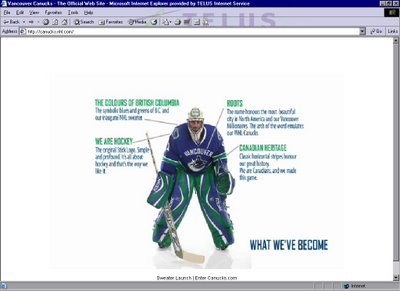 No, god dammit this is not an upgrade. But I like Canucks.com (sarcastically) trying to justify the new jersey.

Regarding the "Vancouver" on the jersey: "The name honors the most beautiful city in North America and our Vancouver Millionaires. The arch of the word emulates our WHL Canucks."

Ok, first of all....fuck the "most beautiful city in North America" part. Ever been to Montreal? Enough said. No comparison.
Fuck the arch honoring the WHL Canucks! Were the WHL Canucks even worth remebering?
Hell were the 1970-80's Canucks worth remembering? Nope.

Regarding the horizontal stripes: "Classic horizontal stripes honour our great history. We are Canadians and we made this game."
Yeah yeah yeah. Those stripes were already there on the 3rd jerseys. I'm not buying into that Canada "rah rah" BS.

Do I own a Canucks jersey? Nope. Do I want to buy one? Hell no!
I'm not a fan of the new look and I think that the ball has been dropped on this one.
Just my opinion. Maybe after the 20 spiced rum and cokes empty out of my veins I'll change my opinion..... maybe not
I think Pfizer's creation was better. Bottom line though, folks is that I want to see this team whoop ass on the ice this year...no matter what their jerseys look like. I just won't empty $100 out of my wallet to buy one of these new creations.