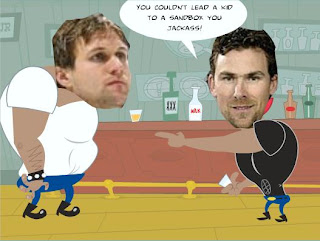 Hey, what can I say? I was bored!!! And boredom does crazy things to a man.
So I made a thoughtless little clip about Naslund and Linden.

Just a daydream...but wouldn't it be great if Naslund skated to center ice with Linden at the Canucks' first home game this season and handed the "C" over to him? For sentimental reasons especially? Do any of you even think that Linden would want that? Do you think Naslund would be up for that? It really would be a great gesture and a big honor to Linden.


**UPDATE**Ope...Jan Bulis signed somewhere in Russia today apparently. (Learn Russian) No more love for Bulis in the NHL I guess. Really, he isn't that bad is he???