I have acquired an image of the new Canucks jersey! You see, I know this guy who is the friend of a co-owner's second nephew's grandkid who took this pic while it was hanging in the back of a Jersey City store. Dave Nonis swore he'd kill him if he showed anyone or took any pictures of it. But this worker, who is also the second cousin to my sister's ex boyfriend's former spouse, didn't take Nonis' threat seriously.

Ah, the kids at Canucks.com forum are so inventive.

So when is this new jersey being revealed anyway? 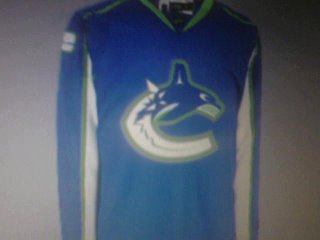