I'm on my way...Home Sweet Home / Another Canucks jersey possibility

Share All sharing options for: I'm on my way...Home Sweet Home / Another Canucks jersey possibility 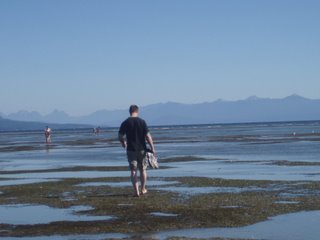 After 2 full weeks of holidays in the Fraser Valley and on Vancouver Island it's time to come home. I gotta say though, I can't remember a holiday that has ever been so eventful.
Vancouver Island really is the place to be in BC. I know Victoria and Nanaimo have high crime rates, but places like Coombs and Parksville are just plain wonderful. If you ever get a chance to go to Parksville and Rathtrevor Beach (pictured), by all means do it. Camp there or stay at a bread and breakfast. The tide goes over a kilometer out at the park and then comes in so fast that you can almost walk it in. Great times.
Did anyone catch a glimpse of Trevor Linden wearing the possible new Canucks jersey in the Province yesterday (below)? Who does the Photoshopping at that paper? Terrible! I hope the jersey looks nothing like that because it is atrocious! What is going on at the elbows? It looks out of whack. 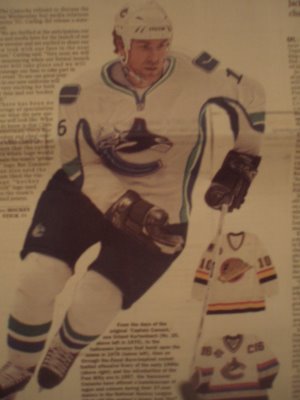