Goal judges going the way of the dinosaur

Share All sharing options for: Goal judges going the way of the dinosaur 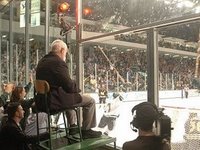 From the Philadelphia Inquirer:

This season, all goal judges - who used to sit directly behind the goals - will be moved to the press box or similar locations depending on arena configurations.
Some judges have complained privately that making borderline calls with pucks on or across the goal line will be difficult from the press box. That's where video replay has held the upper hand.

The goal judge signals a goal with the red light, but it is up to the referees, the video goal judge, or both to decide whether a goal was scored.

I guess the goal judge can press a button from a remote from the press box to turn the light on after a goal is scored, but really, the goal light may as well go extinct as well, unless it is flashed after a video review shows a goal. But the refs and video make the calls now for the most part.

Philadelphia is capitalizing on the new freed up space behind the goals and turning them into luxury suites.
Other arenas may follow suit.