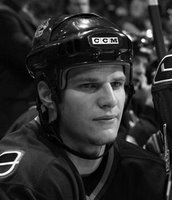 The Canucks have re-signed Bieksa to a 3-year $11.25 million deal. That means he will be around just long enough to win a Stanley Cup with Vancouver. This also avoids a major headache next summer for Dave Nonis. Bieksa was looking like a steal last season at $525,000 per season. He has earned his raise no doubt about it.
Last season he played 81 games, had 12 goals and 42 points. He had 6 goals and 13 assists on the power play. He averaged 24:16 of icetime per game. I'd say that's well worth $3.75 per season. That's actually a bargain.

Pay no attention to new rumors of the Canucks being interested in Brian Gionta. One week it's Elias, next it's Gionta. It's all speculation and/or lies. Can you really see Nonis pulling off a blockbuster at this point? That will depend on how talks are going with Mattias Ohlund for an extension. Ohlund hits the free agent market next summer.
Nonis is probably going to bargain hunt a replacement for the departed Smolinski.

The Red Wings have announced that they have signed Dallas Drake to a 1-year deal. More details to follow. The Trail, B.C. native is an excellent gritty depth player who can chip in once in a while. The 38 year-old averaged 12:53 ice time last season with the Blues.
Drake career stats.
Here's another guy that would have made a decent Canuck.

The Coyotes have signed Mike York to a 1-year $1 million contract.

Oh boy. Daniel Briere's agent has said today that he never even received a call during this past season from Sabres' management to iron out a deal, according to the Fourth Period. These kinds of reports are only going to makes Sabres' brass look that much more stupid for not keeping one or both of the departed Briere and Drury. You can add the Oilers' stab at Vanek potentially to the above scenario. GM's need to secure their core guys early, or else possibly face the consequences.

I see Bill Guerin has already been named the Captain of the Islanders squad. Below is a picture of the Islanders press conference announcing the new guys, Sim, Comrie, Guerin, and Fedotenko. Look at Comrie, he looks like an 18 year-old choirboy! 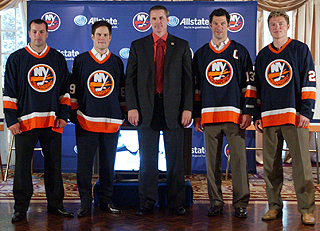 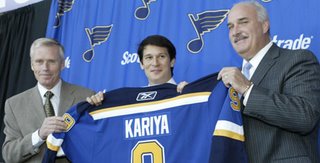 Kariya throws the first pitch at a Cardinals/Diamondbacks game on July 3. 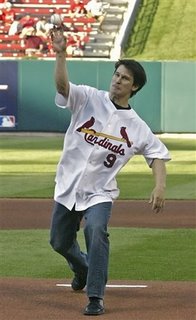