Who the heck is Juraj Simek?

Share All sharing options for: Who the heck is Juraj Simek? 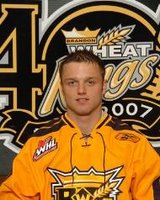 The Canucks announced that they had signed 19 year-old Slovak winger Simek to a contract and terms were not released.
Simek was drafted in the 6th round (167th overall) by the Canucks in the 2006 Entry Draft. He spent last season with the Brandon Wheat Kings, scoring 28 goals and 57 points in 56 games.
Prior to last season, Simek has played pro hockey in Europe in Switzerland since 2002. His stats there can be found at Canucks.com.

The scouting report on Simek from Hockey's Future states: He is a good skater who is also strong on his skates. He is said to have very good puck-handling and one-on-one skills with the ability to deke past opponents. Central Scouting says he is not one to initiate contact but is not afraid to get physically involved either.