Rangers GM Glen Sather has not had a single substantive negotiating session with impending free-agent center Michael Nylander, meaning the club could plunge into the free-agent pool without either a first- or second-line center on the roster.
Sources have told The Post that under these circumstances, the Blueshirts intend to target both Scott Gomez and Chris Drury to fill the looming holes in the middle. Though both are expected to receive larger offers elsewhere - Gomez from the Kings, Oilers and Flyers; Drury from the Kings and Sharks, with the Avalanche also in play - both have expressed serious interest in coming to Broadway.


Of course it's easy to be prophetic like that when most players would love to play in New York...

-(5:56) Scott Niedermayer is going to announce his retirement soon, at the ripe age of 34. Amazing, isn't it?

-(5:50) The Islanders have signed gritty guy John Sim to a 3-year deal, while the Penguins have taken the mighty Dany Sabourin off our hands, signing him to a 2-year $1.025 million deal. Looks like Cory Schneider is going nowhere, and will back up Luongo next season.

-(5:25) The Avalanche have signed Scott Hannan to a 4-year $18 million deal. The Sharks continue to lose veteran defencemen over the past couple years. Maybe they should land Sheldon Sourray.
The Stars have signed Sergei Zubov to a 1-year extension through 2008-09. Zubov will make $5.35 million.

-(5:11) With the Rangers landing Gomez and Drury, I'm getting flashbacks of how things were before the cap: the Rangers bought all the talent. Gomez will earn $51.5 million over the next 7 years.

-(5:03) The Capitals have signed Viktor Kozlov to a 2-year $5 million deal. McPhee is still being dutch. I hate this signing. You got the wrong Kozlov, you meathead!!!

-(4:42) Jeeziz, have the Rangers signed Chris Drury as well??? That's what Sportsnet is saying. A 5-year $35 million deal for Drury. Where the hell are the Rangers under the cap, or are they over ?!

-(4:37) The Leafs have finally jumped into the fray and signed Jason Blake to a 5- 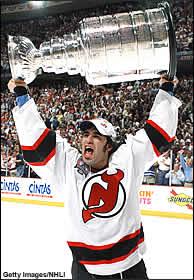 year $20 million deal. I like that acquisition. Blake is a speedy pest who can put up goals.
With all of the cap space the Islanders have cleared, you have to wonder if Ryan Smyth is staying on Long Island.

-(3:54) ESPN is reporting that the Rangers are almost done signing Scott Gomez to a 7-year deal.

-(3:44) There is a rumor circulating that a trade is almost complete between the Oilers and Flyers that would send Jason Smith and Joffrey Lupul to Philadelphia for Joni Pitkanen and Geff Sanderson. If this trade evolves, I would not be happy if I was an Oilers fan. Jason Smith is the leftover heart and soul of the club, something that Pitkanen and Sanderson will not bring in return.
IT'S OFFICIALLY A DONE DEAL. 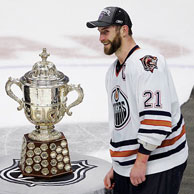 Gad. The Flyers are completely overhauling their roster to erase last year's disgrace. The Oilers are turning more and more into team Euro. They will get more offence out of Pitkanen and Sanderson. The Flyers roll the dice on Lupul and get a great defenceman in Smith.

-(3:06) The Lightning have signed Michel Ouellet.
The Lightning need some scoring depth, and Ouellet is an offensive player on the rise. We'll see how well he does away from Crosby though.

-(3:05) The Hurricanes have signed Jeff Hamilton to a 2-year deal worth $800,000 per season. Dang, this is a guy I hoped would land in Vancouver. Hamilton is pretty streaky though, however.

-(2:43)The Bruins have signed tough guy Shawn Thornton to a multi-year contract.

-(2:23) Very quiet on the Vancouver front so far today. Not much mention of them at all. I would like to see someone like Wes Walz signed in Van, seeing that Nonis probably is not going to make a blockbuster.

-(2:05) The Panthers have signed Radek Dvorak to a 2-year contract. This is the second stint in Florida for the winger. He was a rookie with the Panthers when they went to the Finals in 1996.

-(2:06) The Black Hawks have signed Yanic Perrault to a 1-year $1.5 million contract. The Hawks are still trying to keep Handzus around as well.
For the record, the best site to follow transactions in the NHL is not TSN, Sportsnet, or HockeyBuzz. It's Spector's Hockey, hands down.

-(1:51 PM) No word on the Gomez situation. I wonder if the Devils will land Sheldon Sourray now?

-Kukla's is reporting that Scott Gomez has signed with the Rangers, which means that Michal Nylander is gone. This is a conflicting report...the radio show WFAN that broke the news apparently, is sasying they made no such report.

The Flames have signed Cory Sarich to a 5-year $18 million deal.

-With Schneider gone, you'd have to think that the Wings are planning on getting Brian Rafalski. Last season, Rafalski made $4.2 million. How much more is he demanding, and how much less will it be than what Schneider was demanding from Detroit? This rumor almost doesn't make sense. 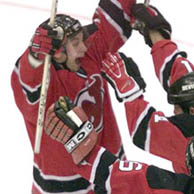 **UPDATE** The Wings have actually signed Rafalski! It is a 5-year deal worth $30 million. So Rafalski is making more than Schneider now...huh.

-Sportsnet breaks that Daniel Briere has just signed with the Flyers, who have a lot of cap space. Gagne needs a good set-up guy and Briere is just that. The deal is confirmed at 8 years and $52 million total, an average of $6.5 million per season.
In a way, this signing seems quick to me. Couldn't Briere get more if he held out longer? He probably wanted to stay on the east coast.

-Whoa! The Ducks have just signed Mathieu Schneider to a 2 year deal that will pay him $5.5 mill next season and $5.75 the following season. You know what that means? Scott Niedermayer is probably going to retire from the NHL.

-The Penguins are so impressed with D-man Ryan Whitney that they have signed him to a 6-year $24 million deal. Whitney had 59 points last season.

-The Panthers have signed Richard Zednik to a 2-year $3.25 million deal. They also signed Brett McLean to a 3-year deal at $1.7 million per season. I'm not so sure about Zednik lately, but I am more and more impressed with McLean. He scored 15 goals with the Avs last season and seems to be on the rise.

-Hey, George McPhee is being active. He just signed Tom Poti to a 4-year deal that pays him $3.5 million per season. Now, sign a center, George...c'mon!

-The Thrashers have signed Todd White to a 4-year deal, worth about $2.3 million per season. I guess this is their big center-signing?

-Joe Thornton has signed a 3-year extension at $7.2 million per season.