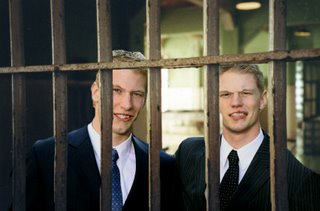 From the Canadian Press: Brothers Eric Staal of the Carolina Hurricanes and Jordan Staal of the Pittsburgh Penguins were among 14 people arrested and charged with disorderly conduct after a weekend party.

The incident early Saturday morning occurred at the Lutsen Resort and Sea Villas, about 90 minutes south of the Thunder Bay, Ont., hometown of the Staal brothers. They were gathered there for 22-year-old Eric Staal's bachelor party. Jordan is 18.

''I'm sure that everyone involved is embarrassed about the incident - as they should be,'' Rick Curran, the agent for both players, told The Canadian Press on Wednesday. ''Not to take anything away from the seriousness of it, it's what can happen when you get any group of 15 to 20 people together and there's loud noise.''

According to a release from the Cook County Sheriff's Office sent out Wednesday, police began receiving complaints at 12:30 a.m. of ''approximately 20 people screaming, yelling, and playing loud music.'' The group was warned by police around 12:50 a.m. to quiet down ''or they may be removed from the property, issued citations/arrested, and/or deported from the country.''

Curran said both players were among those who obeyed the first police warnings.

''Unfortunately, those that did get up and go to bed when first warned about the noise, including Eric and Jordan, are still among those that were woken up and asked to leave the hotel,'' said Curran.

Around 3 a.m., according to the Sheriff's new release, the group was ordered to leave the resort with the help of ''Cook County Sheriff deputies, a Minnesota state patrol trooper, and a United States border patrol agent.''

''After leaving the property, the group gathered on Highway 61 and began harassing passing motorists,'' the Sheriff's release said. ''At approximately 4 a.m. the suspects were placed under arrest for disorderly conduct and obstructing the legal process. Some of the suspects fled in to the nearby woods.''

The Staal brothers were among the 14 men arrested. Eric Staal was among the 10 who spent the night in jail. Jordan Staal was released after booking but not before being charged with consumption of alcohol while under 21 years of age, in addition to disorderly conduct and obstructing the legal process.
A couple things:
- This story cracks me up. Bachelor parties are great! At least Eric didn't get tied up to a statue naked. We actually duct taped my brother to a statue on Main Street in my hometown for his stag. He was only wearing boxers. Some of the guys also shot him with paintball guns prior to that.

- I wonder what momma Staal is going to say about Jordan illegally drinking. Someone's getting a spanking when he gets home!

- Too bad the brothers didn't run away through the bushes like a bunch of the other kids did. I would have done that as well.