Share All sharing options for: Separated at Birth: Heatley 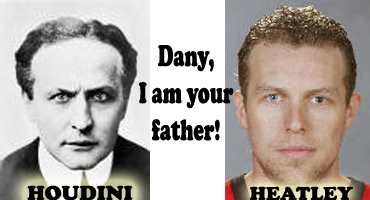 There isn't many other ways to put the performance of Heatley in the Finals. Spezza had alluded to the line losing chemistry and not being able to get it back.
I lost a bit of respect for Heatley when he complained after the game 2 loss that the Sens had lost a lot because the Ducks were clutching and grabbing like in 'old-time hockey' and that the ice was bad in Anaheim. Those were lame excuses. If he was referring to their checking of him it didn't matter. Heatley never persisted and broke through the checking.
It wouldn't suprise me one bit if he blames a phantom injury on Thursday for his absenteeism in the Finals. I would have a hard time believing it.