Share All sharing options for: Rangers make a deal with Shanahan / Crosby extension 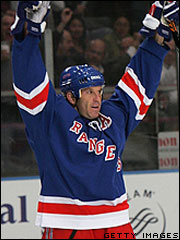 **UPDATE**
Shanahan will make a base salary of $2.5 million with the chance of earning an extra $2.8 million with performance-related incentives.

It is rumored that Shanahan will start at a lower base salary and load up on incentives in order to ease the Ranger's cap situation, having signed Drury and Gomez earlier. According to the great site, Hockey Analysis, the Rangers are sitting at $40.9 million before Shanahan's contract is added. But they still need to more room to sign Henrik Lundqvist and probably Sean Avery as well.
Lundqvist could receive Cam Ward money through arbitration, which is about $2.5 - 3 million per season.
Avery had 20 points in 29 games with the Rangers when he was acquired later in the season, and 5 points in 10 playoff games. He was making $1.1 million and could be seeking anywhere up to $1 million more.
The Rangers are going to be close to the maximum. We'll see exactly what Shanny got when the details are released.

A sweet sweet deal for Crosby today, and the Pens. From Sportsnet:

Sidney Crosby and the Pittsburgh Penguins found a mutually satisfying number in negotiating a five-year contract extension.
They settled on US$43.5 million because the annual average is $8.7 million, which corresponds to the No. 87 sweater the superstar centre wears.
"That seems like a pretty good number," a satisfied Crosby said from his parents' Cole Harbour, N.S., home during a conference call Tuesday. "It's kind of unique."


Ah, that's so sweet. That's 5 extra years of hating Crosby and the Penguins for me!! Wooha!!

Paul Maurice is loving the guys that John Ferguson Jr has added to the team. (Video)