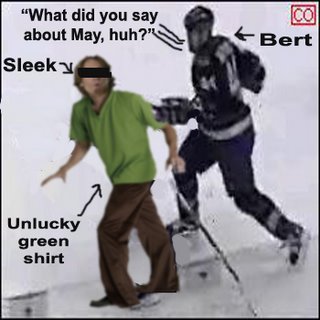 I'm still getting a kick out of the Ducks signing Bertuzzi. Especially when Teemu Selanne has not made up his mind about retirement yet. Even so, is Bertuzzi a worthy replacement for the Finnish Flash? Nope. Bert is more like the "Crippled Canadian" in my books. But at the same time I anticipate seeing how he pans out in Anaheim. Hopefully about as good as he did in Detroit. Then we have seen the end of Anaheim as any potential of repeating as Cup champions.

There is a lot of hooplah over the current cap system and how we are still seeing New York and the likes getting all of the talent and out-spending everyone.
I think the question is "why" are they able to do so?
Could it be because Gomez and Drury, for example WANTED to play in New York? Are their families rooted in the area and they didn't want to disrupt that?
How are the Avalanche over-spending again? On Ryan Smyth and Scott Hannan? Give me a break.
How many of these players took less than what was offered to play for a team that they WANTED to play for? I'm sure Smyth wanted to head back west closer to 'home' and Colorado a) offered the best deal or b) had a team that was more comitted to winning.
Maybe a lot of players don't want to play for Edmonton, or Chicago, or Columbus. I think that is the case. So why blame Gary Bettman now because the cap system is "bringing us back to square 1"? It's not justified, and the cap system was/is a grand idea. The players choosing where they want to play is an unforseeable glitch.
So the Rangers got Gomez and Drury...so fucking what! Those signings will come at a cost. They are not going to have 4 lines that they can roll with perhaps because they have spent all of their money up front.
The 2 teams in the Finals this year had 3-to-4 lines to attack with, especially the Senators. THAT will win championships more often than not.
To me, the Rangers blew their load, wow'd the shit out of everybody, and will suffer for it. Really, the Rangers were not far off from competing in the Finals last year, and then they go and overhaul the team. It's foolish. And it's very Rangers-like.
Teams like Vancouver will not bow to the bidding wars post July 1st. They will wait it out, and build a solid, balanced team with cheaper guys later on in the summer.
Do I feel bad that the Sabres were labelled the model team for success only to lose their top 2 guys and perhaps any chance to repeat their current 'success'? Fuck no! They had their chances and BLEW THEM. Now someone else is going to get a chance to have that kind of success. And that is not a bad thing! That is the balanced, league-wide success that Gary Bettman is trying to accomplish. We had a Senators-Ducks Finals this year....let's have a Penguins-Canucks Finals next year.
Is that so bad? Am I missing something here?
If the fuckup GM's in Edmonton, Chicago, Columbus, etc want to create undesirable team environments, why does Bettman deserve the blame for that when UFA's don't sign there?
Someone help me. I'm going to bed.