One more piece left to the Canucks' puzzle

Share All sharing options for: One more piece left to the Canucks' puzzle 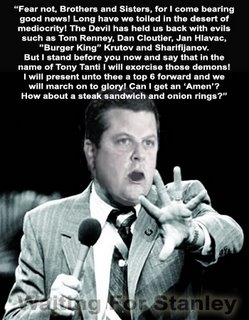 The back end is now shored up, and DEEP with the addition of Aaron Miller yesterday.
But what to do about the goal-scoring issue, which became painfully clear in the playoffs. The depth chart up front reads as follows (using Mike's chart as a reference):

There are several angles here.

1. Nonis has faith that Morrison is a bonafide 2nd-line center and the Canucks go with the 4 centers they currently have.

2. Matt Cooke can improve upon his 10 goals and 30 points from last season and remain on line 2. If not, a top 6 winger needs to be acquired.

UFA wingers left who could fit in the $4 million price range:
-Martin Gelinas. (C'mon Marty, get over here!)
-Mike Johnson (no no, too injury-prone)
-Jeff O'Neil (no thanks, but a possibility)
-Teemu Selanne (big price tag, and would need to make some room)

3. The Canucks are content with their top lines, expect more of them, and sign a cheaper forward who could crack the top 6 if he plays well.

4. Jason Jaffray turns into the next Tony Tanti and sticks with the club.

What is going to happen? What would you like to see happen here?