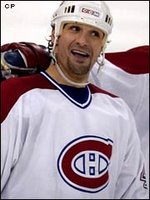 Kevin Lowe has redeemed himself a little today, landing the much-coveted Sheldon Souray. The terms have not been released yet. **UPDATE** a 5-year deal worth $27 million bucks!!! Hey, that's less than I thought!
The 6'4" 220-pound Souray had a career year last season (go figure, in a contract season), scoring 26 goals and 64 points.
Insanely enough, Souray only has 66 goals and 186 points in 506 NHL games. So the 31 year-old is either hitting his prime, or excelled in a contract year and will, as Hodge puts it, blow his knee out in Edmonton. Expect the latter, haha! Souray has been playing in the NHL for 9 seasons and has surpassed the 80-game mark only once.
At least Lowe now has some scoring from the point with Souray, Pitkanen and Tarnstrom.
Lowe was sitting at about $31 million in cap spending prior to signing Souray. So you have to think he signed him for something in the range of $6-7 million just to lure him to a team that no one wants to go to.

Well, Souray did say this today:

''I'm heading home to Alberta and I can't wait to step onto the ice at Rexall Place,'' Souray said in a release. ''It's always been a terrific building to play in. I couldn't be happier with my decision and I can tell you it was an easy one to make.
I'm looking forward to playing in Edmonton for a great organization and believe me, I know how good the fans in Edmonton are.''


Oh yeah, Sheldon you should have a blast...playing on a last-place team!