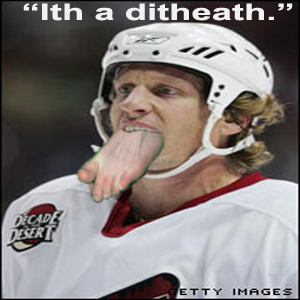 Roenick, a nine-time All-Star who played with four teams, sent a text message to a reporter at The Philadelphia Inquirer reading, "I'm retiring; is that still news?" The story was posted on the paper's Web site Wednesday.

Yes, you egotistical freak, that is still news.
-The 37 year-old has never won a Stanley Cup
-His best days were early in his career with the BlackHawks. He had 2 consecutive 107 point season there from 1992-1994.
-He reached the Finals with the Hawks in 1992. In 18 playoff games that run, he had 12 goals and 10 assists. I actually liked the bugger back then.
-His career stats during the regular season and the playoffs are impressive.

But I am not convinced that he is done. A desperate team could make him an offer and he could accept it by the end of the summer. Roenick is all talk. In April of this year, Roenick told the Arizona Republic that

he was leaning toward playing again next season, adding that if any team wants to sign him he'd play for the league minimum salary of $450,000.
"It's not about money right now," Roenick said. "I don't care (about that). It's just to play and have fun and play on a team that fits my heart and my mind."


Roenick said there were four teams he'd like to play for, the Coyotes among them. The others are Chicago, Dallas and San Jose.
Why would one last hurrah in Chicago be out of the question? If they offered him a shot you KNOW he'd take it.
So I am taking his words with a grain of salt.
Meanwhile, just in case we never see his sorry ass on an NHL ice surface again, I give to you: The Best of Roenick on YouTube.