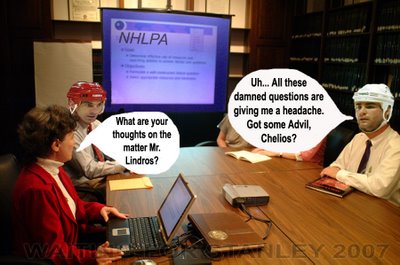 Eric Lindros is so concentrated on his work with the NHL Players' Association these days that his actual NHL playing career has been put on hold.

As in, will he play again next season?

"Right now my focus is the 'PA work," Lindros told The Canadian Press on Wednesday. "I'm not really concerned about the rest of it. But the last couple of years have been pretty frustrating in terms of not getting through without being injury-free. . It's just frustrating."

"I've got an idea of what I'm going to do and I've had that idea ever since the last game of the playoffs," Lindros said. "But right now is about focusing on the 'PA."


I've never been a big fan of Lindros. So it won't hurt my feelings if he retires. When he's healthy though, he still has a lot to offer any team, and can produce at a point-per-game performance.