Share All sharing options for: Let's wrap up UFA Day 1, shall we? 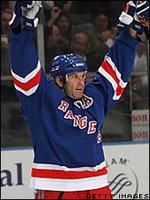 **UPDATE**
The Blues have signed Paul Kariya to a 3-year deal just before midnight EST.

Who was the winner in the first day of UFA spending? Was it the Rangers, signing Gomez and Drury? Perhaps. What will become of Brendan Shanahan now? How much money do they have left to spend on him? What about Henrik Lundqvist? Sean Avery? Nylander?I don't even know where the Rangers are in cap spending, but you have to think that Nylander is done on Broadway. And you can almost tack Shanahan on that list as well. The top priority has to be signing Lundqvist. Shanahan is already rumored to be going to Buffalo. The Rangers made the biggest splash, but it may come at an expense.
Is Fedor Tyutin their point-producing defenceman? I thought they would address that issue.

I think the Flyers nearly come out as the winners. They had plenty of cap room and got a great center in Briere to play with Gagne and Knuble. Then they lost dead weights in Pitkanen and Sanderson and got Joffrey Lupul and Jason Smith. Lupul could play better away from Edmonton and Jason Smith is a gritty leader that can immediately wear the "C" in Philly. The Flyers have so many new pieces to their puzzle. If they click, Philly is out of the NHL basement. And really, that is fair to presume.

Dave Nonis did nothing on Day 1 and that was almost to be expected. The Canucks' GM is going to bargain-hunt once again to try fill in holes offensively, and have the team score by committee beyond the Sedins. A couple of Wes Walz-types are what we can probably expect.
Is he looking for a defenceman? Why? We have plenty of depth there.

The Oilers were almost clear losers because of the acquisitions of Pitkanen and Sanderson and the losses of Lupul (no biggy) but especially Jason Smith. That team is going to be struggling for identity next season and look to be getting smaller and weaker by the minute.

What do the Sharks have up their sleeve for a defenceman? Now they've lost Scott Hannan. They need a scoring defenceman!

I like seeing Florida mix things up a little in acquiring Zednik, McLean and Dvorak. But I thought they wanted to get bigger.....

I still don't understand the Detroit scenario with their swapping of D-men. They let Schneider go only to pay Rafalski about $500,000 more. Maybe they wanted a guy they could keep longer (younger). Rafalski doesn't put up the points that Schneider does though.

I like Calgary's acquisition of Cory Sarich as well. While the 28-year old won't put up the points that the departing Brad Stuart or Roman Hamrlik will, he is big and feisty and comes with Stanley Cup experience. A Keenan-type of player.

Jason Blake's arrival in Toronto is fine and dandy, as he adds to the Leafs' pesky nature. But how good is he defensively? Is Vesa Toskala going to be that much of a difference-maker in goal? He is going to have one heavy workload that's for sure.
What happens to Raycroft now?