"I think you have to ask yourself, `Do you want to win?' Free agents who went for all the money last year didn't win, with one exception, Scott Niedermayer," Quinn said, referring to the Ducks captain who won a Stanley Cup in his second season with Anaheim. "There's a lot of situations where it didn't help the player in a competitive situation, because it affects the team's ability to have players around him."

A valid last-grasp point by Quinn. It raises the unfortunate question of a player's loyalties. "Do you want to be a greedy prick and sign with some other team that will offer you the millions extra and perhaps have less success, or do you want to take perhaps a couple million dollars less and stick with your current team and go for the Stanley Cup once again next spring?"
The Sabres have come close to a spot in the Finals twice in the last 2 years yet fallen short. If they lose both Briere and Drury, you have to think that their chances of repeating such a feat is unlikely.
What would you do?
I am moralistic for the most part. I would stick to the team. But you have to wonder though....if Drury knows that Briere is going to test the free agent market anyway (or vice versa) and your team is about to lose a top 2 center because a deal is not worked out, why not accept that as an insurmoutable blow and realize that your team may not be able to repeat it's recent success? That is probably the case with Briere and Drury. Or, perhaps a deciding factor.
And a tough pill to swallow for Sabres fans.
Buffalo should have beaten the Sens in last season's Semi-finals but did not put out a decent team effort and really, blew their chance.
As a result, players (typically like normal human beings), due for a raise go somewhere else when not given what they want, or feel that they deserve, and get richer. It's a fucking shame. Where is the loyalty?
In today's NHL, it's an on-going occurence.
In Larry Quinn and Darcy Regier's perfect world, these guys would sign long term for less dollars than they are commanding. And the Sabres' franchise would succeed long 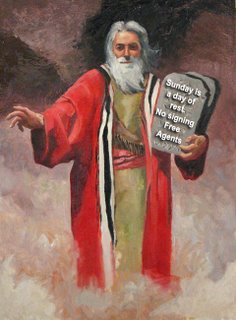 term. But as of tomorrow, unless Briere and Drury become 'born-again Christians' and realize that money isn't everything, the party begins. And they will have bigger yachts and houses elsewhere. The Sabres will never be the same.
Neither will the news world and all those covering it. As of lunchtime tomorrow, the face of the NHL will change.
Speaking of Christians, July 1st falls on a Sunday. I wonder how many GM's will skip the morning service to snatch up some UFA's today. Ever notice how Sundays are usually quiet for transactions, or is that just the beer talking? The last time July 1 fell upon a Sunday was in 2001. On that day, the Stars signed Pierre Turgeon and Rob Dimaio. The Islanders signed Garth Snow. The Oilers traded Doug Weight to St. Louis. You get my point...it's the beer talking!