Share All sharing options for: Kevin Lowe: Villain or Competitor? 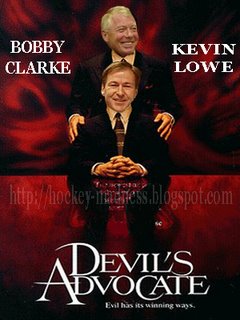 After taking some time to think about what Kevin Lowe did yesterday with Thomas Vanek, I think I have come to a few conclusions.
First of all, there is nothing in the rulebook that states Lowe did anything wrong.
Instead, it becomes a moral issue. Larry Quinn fired back at Lowe yesterday basically saying "heads up, we could do the same thing to you someday." Darcy Regier made it clear that matching Lowe's offer was a message to the rest of the NHL GM's that they are not going to get away with shopping for Sabre RFA's in the same fashion that Lowe tried to.
However, that statement from Buffalo comes at a heavy, if not more, a risky price. Vanek, 23, scored 43 goals and 84 points in only his second NHL season. The Sabres now will hope and pray that Vanek is the real deal, as they will be paying him $18 million in his next 2 seasons, and over $6 million per season for the remaining 5 years. If Vanek falters, the Oilers will always to be to blame for the financial hardship put on the Sabres.
Lowe said it was "nothing personal" against the Sabres, but really, it becomes personal in a sense. Shit, the Sabres have been through enough in the past week already, losing Drury and Briere. I'm not saying I feel bad for Buffalo. I'm saying that this is dirty pool, and the vast majority of NHL GM's won't do such things.
Sure, Lowe is desperate, and no players want to play in Edmonton right now...blah blah, but Lowe violated a code of ethics, whether it was legal or not. And really, he's opening a can of worms that should remain shut.
No, I would not do what Lowe did. Karma is a bitch. And Thomas Vanek, who was suprised by the lucrative offer, is not worth that kind of money at this point in his career, in my opinion. Not after only 1 great season.
It really was Bobby Clarke-like. And now the Sabres, who thought Lowe was bluffing, have a few less million to spend for the next 7 years. For their sake, hopefully Vanek earns it.