How bad could it be if Nonis signed Forsberg?

Share All sharing options for: How bad could it be if Nonis signed Forsberg? 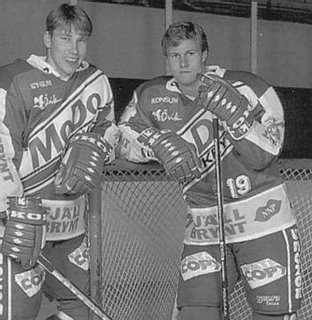 The stories of Naslund and Forsberg wanting to play together have been going on for years, as they grew up together in Ornskoldsvik Sweden. Naslund is only 10 days older than Foppa. The 2 played well together for Modo and various world championships ever since.
Nonis tried different centers for Naslund all of last season, even putting him with the Twins. The Smolinski experiment failed. Naslund no longer clicks well with Morrison.
So would it be worth the risk of signing Forsberg to a 1-year deal, as Naslund has one year left on his contract and may retire afterwards? Are Forsberg's injury problems enough to scare Nonis and every other GM away?
I am torn on the matter. We are stuck with Naslund until next summer. He has not put up the same numbers since Bertuzzi left. You know for a fact that the 2 would click well together.
Rumor has it that Forsberg won't be available until 2 months into the season. So? The Canucks could be competitive in his absence even with the current roster.
I know I'm kicking a dead horse here, but if Forsberg took a cut from his $5 million plus contract and incentives were tacked on (if possible) wouldn't now be the right time to make it happen? Or should we write off Forsberg because of his injuries and go the trade route to find Naslund a decent centerman? Would the acquisition of Forsberg ruin the team's chemistry? Does Forsberg have 1 more 60 game season and extended playoff run left in him?
Can we depend on Naslund and the Sedins stepping it up next postseason to give the Nucks a better chance at winning? Is a higher-profile player needed to add to the current mix?

The time for this team to push for Lord Stanley is NOW.

PS: And yes, Nonis would have to clear a bit of cap space to get Forsberg.