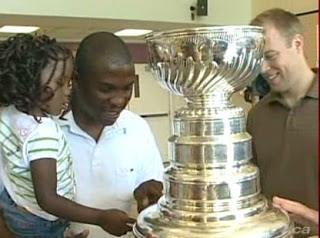 JS Giguere was next up in line to spend a day with the Stanley Cup. First thing he did was take it to a Sick Children's Hospital in Montreal. The issue of sick children is close to Giguere as his own new born son suffered an eye ailment just after he was born. His vision was in question. I know I bag on hockey players for their on-ice performances, but this is just pure class from Giguere.
Anyway, TSN has the video of the event and an interview with Giguere about the possible losses of Niedermayer and Selanne.