Share All sharing options for: Finally saw the Transformers Movie 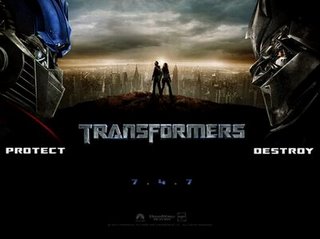 I've waited a long time for this movie to come out, and I finally watched it tonight. To be honest, I am a little torn about it.
I am not much of a movie ctitic, but I'll give this my best shot and keep it short. The show left my brain in a frenzied mess.

-I am not a fan of Michael Bay or many of his shows. This movie was mega dramatic of the cheesy variety, much like Armageddon, another Bay film.
-The love story between the main characters had no feel to it. It felt forced and unnatural.
-The camera work was so bloody shakey during fighting scenes, sometimes I had a hard time figuring out what exactly had just happened or who got hit or killed.
-Blah blah, mighty USA military might blah blah fucking blah. How about the Transformers come to Canada and fight in Vancouver...over beer. Yes, beer will be the true Matrix of Power. We'll have the mounties chasing Megatron on horses and all the civilians will throw beer bottles at them and use slingshots and BB guns.
-I admit it...I always liked Starscream. And there wasn't enough of him. At least he escapes into space in the end...a sequel should happen with the familiar "Starscream becoming the new leader of the Decepticons, yet Megatron is not really dead and returns to zap his ass."
-There should have been more character development with the Transformers themselves as well. Bumblebee was really the only one who got that.
-Can we have a Transformers movie with Devastator in it???
-Optimus Prime made a point about not hurting humans, but you know that during the battle scenes in the city, there had to be 1000's of casualties.

-The effects were the best I've seen. Watching them transform brought about so many nostalgic feelings. Love that stuff. Makes me wish I still had all of my Transformers toy collection. (I used to have quite a few of them, combined with my brother's. We had the Dinobots, Devastator, Defensor, Jetfire, Blaster, etc.)
But I enjoyed how the effects of the the robots transforming got better and better as the movie went along.
-Megatron is the shit. Too bad he was killed by....a human. That ain't right. Anyway, the scene of Optimus and Megatron crashing through that one building one wall at a time was tremendous.
-I'll somewhat forgive the cheesy dialogue because the old cartoon dialogues were not any better. But props for the humor in the script. A lot of hilarious moments there. Bumblebee 'leaking' on the Sector 7 honcho?? hahahaha!

For an action show, it hits the nail on the head. Was that 2 and 1/2 hours long? It didn't feel like it. The action was intense. And like I said before, my brain is scrambled. I'll have to watch it again to gain a better perspective and opinion.
But as for now, I give it a 4 out of 5. Regardless of any negative opinions I have of it, it still blew my mind.