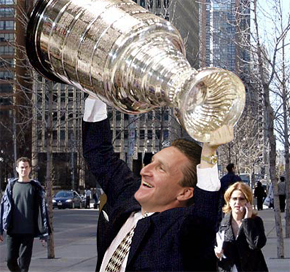 Hey, I knock the Leafs quite a bit but I will say this: John Ferguson's Jr's acquisitions of Jason Blake, Vesa Toskala, and perhaps even Mark Bell do make the Leafs better.
These moves have brought praise upon JFJ from the team that plays under him, especially from Mats Sundin. In reference to the Toskala/Bell pickups, Ferguson said:

"He (Sundin's agent) said Mats wanted me to pass this along: 'He thinks it's an excellent deal and he's excited," Ferguson said.

Sundin had even called Ferguson himself to express his gratitude, apparently unlike Mats to do so.
In regards to Jason Blake Fergie said:

"I talked to Mats on two or three separate occasions," Ferguson said. "I had thrown some of the names at him and asked him to give me his thoughts. He gave us some real good feedback. Jason was a player that he was definitely excited to hear that we were pursuing."


For more on this, check out the Vancouver Sun.

Hey, it's a tear-jerking story, but you already know what my opinion is of all this...