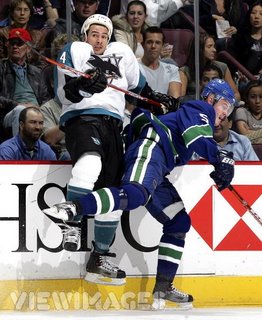 It's a 2-year deal worth $2.2 million. Krajicek was a restricted free agent. He has found a home in Vancouver and fits in well as a dependable defenceman. Krajicek matured leaps and bounds in a Canucks uniform and really made the Bertuzzi trade look worse for Florida. He had 3 goals and 16 points last season.

The Leafs have signed UFA Bates Battaglia to a $1.3 million deal. I am not suprised by this. Battaglia fit in well in a checking role, scoring 12 goals and 31 points. Battaglia has played several years with Paul Maurice with Toronto and Carolina.
Now watch him get traded. The Leafs are still rumored to be chasing Slava Kozlov.

Hockey Analysis is updated as far as NHL team-by-team salaries go. Nice work, David! Now you can see where the New York Rangers stand in cap commitments. They are at about $36.7 million with big names like Shanahan, Lundqvist and Avery still to sign (and about 7 others).
Check out where the Canucks stand. It further confirms Nonis' bargain-hunting stance, or willingness to make a trade to clear a bit of cap space.

It is being reported that the Kings have signed Tom Preissing to a 4-year $11 million contract.

After not having the option of dumping the salaries of a Malakhov and Mogilny this year, Lou Lamoriello, the crafty dog, lost both Gomez and Rafalski. It is reported that Lou asked Devils' management to take him out behind the barn, shoot him, and put him out of his misery.
Really though, Lou said: "We really wanted him (Rafalski) to stay. It just comes down to the fiscal aspect of decisions and what you can afford in putting a team together while respecting the other players. We just couldn't compete with some of the numbers out there. No animosity. This is the unfortunate part of the game. Money has a way of making decisions.
We have tremendous confidence in Andy Greene, Johnny Oduya and Paul Martin."

Watch out for Andy Greene. He looks poised to take over for Rafalski.

The Hawks have signed GM Dave Tallon to a 2 year extension.

"I'm very excited that the Blackhawks have given me the opportunity to continue to work toward our goal of winning the Stanley Cup," said Tallon.

How about just making the playoffs first, Dave. The Hawks are in the worst funk in NHL history, but at least Tallon brought in guys like Khabibulin and Havlat to turn the tide a little.