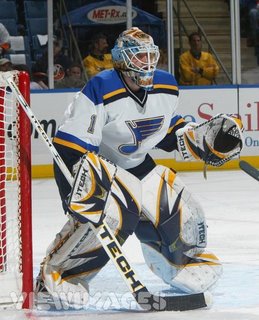 I think I'm missing something with this signing. Is Cory Schneider not ready for the NHL yet, or is Nonis working on a big trade? Maybe Wade Flaherty is retiring from the Moose. I have no clue.
Sanford is a major upgrade from Sabourin though. Maybe Luongo will get more nights off now so he can mentally rest for a long playoff run.

Dammit! The Wild have re-signed Wes Walz. So much for my Walz-to-Vancouver thinking patterns. Oh well. It's impossible to predict what Nonis does anyways!

The Wild have signed goalie Nolan Shaefer away from the Sharks. I guess the Wild needed to fill the gap with the Houston Aeros left by Josh Harding this coming season. That or Shaefer, who has more NHL experience, will back up Backstrom.

Rumors are swirling that Slava Kozlov, probably the best leftover UFA (already) is in Dallas hammering out a deal with the Stars.

The Lightning have signed Brad Lukowich to a 3-year deal.

When it rains, it shits in Edmonton. The Oilers are crying foul play by Michael Nylander, saying they had a deal with him completed and then Nylander signed with the Capitals instead.

"However, while the Oilers were expecting the returned signed agreements from Mr. Nylander and Mr. Gillis, the Oilers discovered through public announcements made mid-afternoon on July 2, that Mr. Nylander had subsequently entered into a long-term contract with the Capitals.

"The Oilers can find no precedent for such conduct in our history. The Oilers are examining and pursuing every course of action available in the best interest of the team and our fans.

"For legal reasons, the Edmonton Oilers hockey club will not be discussing the details any further at this time."