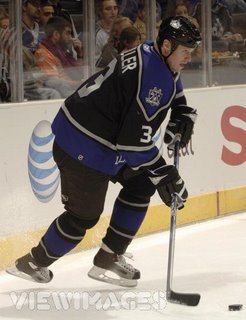 I didn't know that Nonis was hunting for an experienced defenceman, but he landed vet Aaron Miller today. Terms of the deal have not been released at this time. **UPDATE**
A 1-year $1.5 million deal....STEAL!
I guess Miller will replace Brent Sopel, who still remains unclaimed in unrestricted free agency.
The 36 year-old Miller isn't going to put the puck into the net very often (he has 24 goals in 620 career NHL games), but he is a big (6'3" 218-pounder) reliable stay-at-home defenceman. He blocks shots and lays bone-crunching hits. He'll drop the gloves if he needs to. A definite upgrade from Sopel...sorry Sopes.
From what I'm gathering, Miller was paid $2.28 million last season. That puts the Nucks at about $46 million with 20 guys signed. So what the hell is Nonis up to? That is a large chunk of salary added to a cash-strapped team. Does anyone else think a trade is coming one of these days?? Who is going to replace Smolinski?
One thing that is for sure, our blueline is STACKED!! Bieksa, Salo, Mitchell, Miller, Krajicek, and Ohlund. So Edler still is on the outside looking in still, as is Bourdon.
Nonis pretty much answers the above questions at the press conference today:

"The way our team is put together, and the way that most teams that are competitive are put together, is from the net out."
We think we have one of the strongest defensive corps possible… and having any chance of being competitive in this league is going to take good goaltending and good defense, and that’s what we’ve looked to shore up."
I have yet to see a team in the league that gets through a year with six defenseman," said Nonis. "You need seven and eight to play. All the defence that come to camp have to come with the mindset that they have to make the team."


Alright, so now what are you going to do up front, Dave? Ah yes, keep us guessing.


Miller stats and bio at NHLPA.com.